It could only be better if it were Quebec rather than St. Augustine.  I say that because Quebec owns my heart and I tend to find beauty where I love.  But we are here and it is now, and that means photos and enhancements, and trials and errors, even during dinner.  It is very difficult for a photographer to escape without his camera.  It is all somewhat of a bus-man’s holiday.  It may be intrinsic to how I see.  I am a Naturalist.  The laws of nature are all around me.  I see them, and they are not watching me.

As well as having my camera with me as a companion when I set out to write, I take my fascination for light and darkness as more than a metaphor.  I am a Naturalist.  My world is ever changing.  I am aware of moments of simple awe, and moments complicated by  compound-complex sentences that refuse to end.

The pictures that are in this “note” are a product of the gifts of solitude and consciousness that arose out of “letting-it-go”.  I want to elevate these qualities to a near divinity, but they are so human, and ever so woven into the daily evolution of life, that they fail when I attempt to cut them away from the mother plant.  It is not divine consciousness that I elevate, it is Human Consciousness.

The simple observation of the wind, or the odor of sulphuric-salt at low-tide, these enable me to see the greater natural beauty that is St. Augustine. We live on the cusp of what mother nature knows is her land.  Not unlike the attempt started 450 years ago to claim the land for humans from humans, Mother Nature has had her eye on our bay-front for her own use.  St. Augustine is trying to save the shoreline for mother nature’s use.  But, even these interventions are an interruption, a cancer that we humans bring with our civilized footprints as fossils for future archaeologist. St. Augustine has a predilection to Pompeii, and to New Orleans. 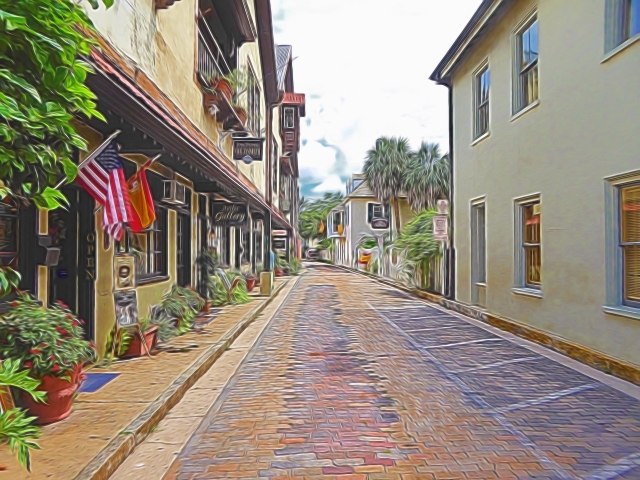 In the summer St. Augustine is a mix of Floridian consciousness with a touch of the tropics that it borders.  We live at the sea level of water, much like New Orleans, or Dutch Holland.  We are intrinsically woven with the sea, into the sea, and the sea is woven into this shoreline that is us.  We know it is the Laws of Nature that govern, and we know that the Law governs as an absolute monarch.  It is as merciless as the Spanish Inquisition or a Roman conquest.  Mother-Nature rules Absolutely. No amount of self-worth or self-pride can out veto a “NO” vote from mother nature.

We killed the previous owners of this land and we now call it ours.  As such, I photograph the land as if it were mine, and I was taking a picture to prove its inheritance.   We are western civilization.

Crossing the Bridge Of Lions on a soft summer evening can feel as glorious as Venice, or as tame as St. Augustine,  and the lens, my companion, searches for an intersection of lines and light.

I enjoy the fascination of finding a fisherman crouched beneath a bridge fishing for life and maybe even for fish.  He seems to not notice 30,000 people circulating around his nest. He carries a tool box for line and hooks, and a knife as any hunter should.  He hunts. 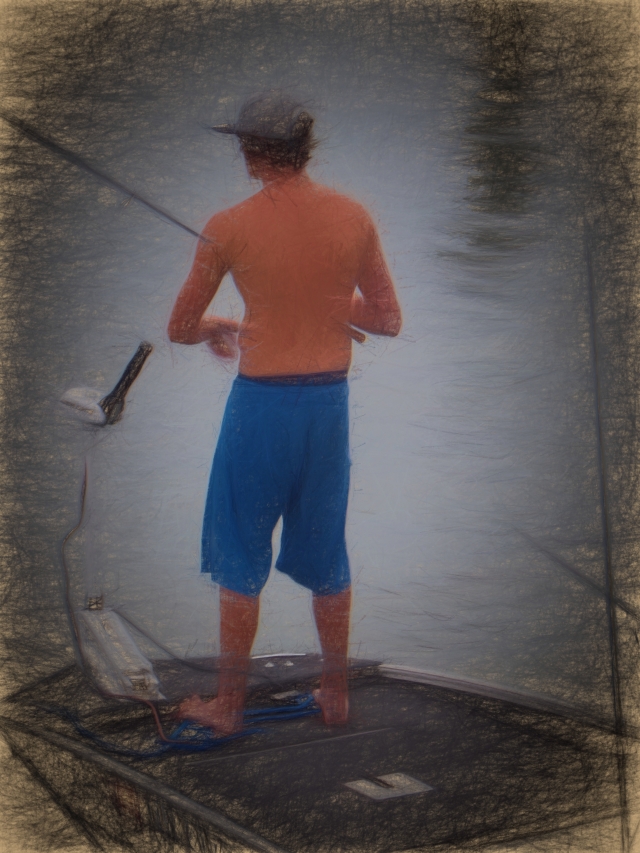 Contrast in St. Augustine is relatively easy to fine.  We must be looking for it.  We must be deliberate about when we choose the moment to shoot.  There are two moments in Art: deliberated and un-deliberate.  The common sense choice is an extension of being deliberate.  It occurs for me when I am closest to belonging.

In the theater of Humanity, we have so often come away from life to find a point of observation that captures more than the light dancing on an object.  We would like to come away and find a purpose higher than our own internal, subjective point of view.  I seem to find it more quickly when I am working with the elements of Nature directly.

There is a meditative aspect to art that is linked to both the cause of the piece and the execution of the piece.   A Naturalist that I have great respect for is Mr. Henry Beston.  The following is a quote from 1949 forward of his book, The Outer Most House:

“Man can either be less than man or more than man, and both are monsters, the last   more dread.”

The stage at the center of town, holding court, held little interest for me.  The masses captured by a slogan and swaying to the odor of ale, did not impress me.  The town on which this stage is raised, however, does call to me.  It calls to me because the past has not been deliberately hidden.  The awful scars of righteousness and bigotry do not seem to be as hidden as they might be in other small southern towns.  The sins and atrocities of man seem to become part of the fabric of here.  Though, there does appear to be a lot of civic pride about a massive blood-bath in the Matanzas river.

I think of it as the respect for art and architecture.  St. Augustine envelopes most visitors at least at first sight. 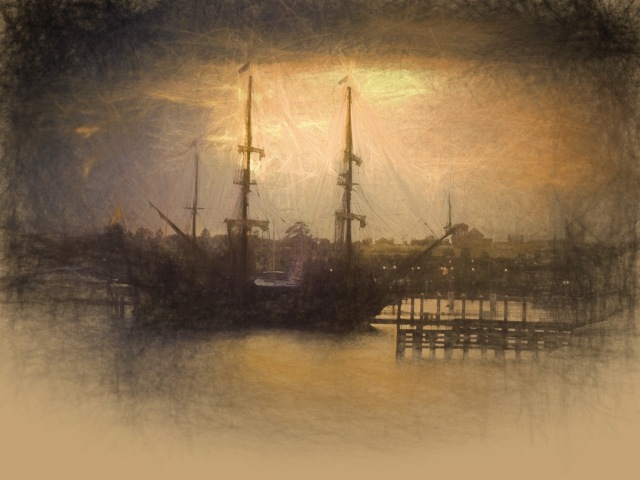 El Galeon, an authentic replica of a 16th century Spanish War ship was one such recent visitor.  We stood on the bridge and watched her come in from the inlet at Vilano and move slowly into the bay front.  Spanish and American flags waved her into place.  She was here to be a part of a festival of celebration.

I find her to be a majestic aspect of St. Augustine’s past.  We were, after all, held here by royalty.  And, for as little as we try to make of it in today’s world, we certainly have been deeply influenced by the behavior of royalty and its part in domesticating western civilization.

This floating art work is a salute to war and the spoils of war. Most of what we have acquired was stolen or forced away from its natural habitat.  Our consciousness belongs to Nature, it has evolved along side the earth since the beginning of time.  We are the furthest-most extension of Nature that we have found anywhere in the universe.  And our little town of St. Augustines is such a representative gem in that crown of thorns.

Our town is a triumph of man against nature.  See what we have cut out of mother nature and put in its place.  See how architectural transplants have added multiple uses to the marsh lands. so many more uses than mother nature had intended for this piece of little paradise.

Evolution is just another name for the slice of life that we have become.  Migration of species moves to a natural order, an order of not-knowing that bothers our consciousness.  Freud would say that psycho-analysis disturbed the sleep of the world.  That German-Jew knew what he was talking about.  We do not want to know that what we have created is created on a bed of sand that has an equal capacity to move from beneath as it does from above.  A foundation of shifting sand brings no comfort. The answer may not be a bigger wall unless we are deliberate about the fact that a bigger wall will only postpone what mother nature, in the long run, will re-capture as hers.  She is a formidable Queen every bit as powerful as Isabell or Elizabeth.  She is mother to every Queen that ever ruled.

There will be more about mother nature in St. Augustine in a separate post.  This post will connect with an episode from the Caleb Sagas.