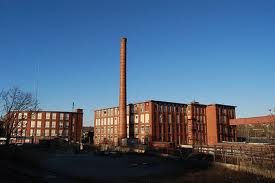 I remember the brown vinyl lunch bag that Dad would take to work.  It had such a strange smell of oil and musk

and dust and grim that when you would open the closet door where it was kept, the entire closet had the oder of the lunch bag.
The closet was off the kitchen, by the automatic washing machine that Mom finally got to replace the old Maytag wringer machine that had manual rollers to squeeze most of the water out from the clothes.  In the closet was a Kirby Deluxe Vacuum Cleaner complete with every possible nozzle and attachment that any housewife could possibly want.   There were racks of bottles of soda from Cliqueco Club and several cases of Narragansett Beer.  Later Dad changed to much cheaper beers when money was tougher to get his hands on.
The brown Vinyl bag held a few utensils that he must have washed at the mill, because they were always there at the bottom of the bag..  And there was a thermos that Mom would fill with coffee before he left for his 12 hour evening shift at the Bonin Textile Mill.  He would be at work for six in the evening and return when his twelve hour shift ended at six a.m. in the morning.  From time to time Dad would buy me a sky-bar and keep it in his bag for me to find as a surprise.
I think it was at least the third textile mill that Dad worked for.  He was a Union man — well most of the time, but there were a few times when he was taken on as over-seer that meant he was with management not labor.  He never did like those jobs because being boss in those mills put you in direct conflict with most of the workers.  And although his pay still came home with him in a small yellow envelope with folded bills and a hand full of change, it was not really enough to make a big difference.  The envelopes, and the change stayed in the second draw of the wardrobe.
There were no more labor strikes that I can remember.  I think that Dad would have come home with those stories had there been anything to tell.  The bigger strikes against bosses happened in 1934 when Dad was still only 14 years old.  At that time he was still working as a pin boy in a duck pin bowling alley in downtown Woonsocket in Rhode Island.  I must have been at most all of ten when Dad took me to the bowling alley and showed me where the pin-boys uses to sit and re set the pins, taking out the dead-wook as the knocked-down pins were called.  He also bowled at the Carbarn, also in Woonsocket, but he never worked at that alley, so it did not mean the same to me.
I remember that when I first saw the bowling alley, filled with smoke and people hollering and even cussin’ out loud, I was both distressed and intrigued.  I was a bit scared, in part because i did not go places alone with my father all that much, and I was not sure how to talk to him.  But most of all I remember my sense of awe that he could actually do that…sit at the end of the alley while these hard wooden balls came rolling at you and when the pins were struck it made a woop-ping kind of noise and the pins flew about and I wondered if he could have gotten hit by them.
I thought I could not do this, but remembered that I should not tell this to him.  He walked around and talked to people occasionally pulling me in closer saying, “yup, this is ma boy.”  I was proud to be his boy and so out of my element.  The noise of the place and the unfamiliar that it appeared to be, along with the unfamiliar that I felt with Dad all converged and I felt kind of frozen terror.
That memory is probably close to sixty years old but the vision, snap-shot in my mind of that moment is vivid and alive.  The smoke was nearly blue and thick.  There were soda bottles everywhere.  Dad was proud that this was his first job and I can think now that he must have remembered it fondly himself.  By the time that I was ten he was thirty-five and must have been sick of the smell of the textile mills that both provided a living for our family and ate him up completely at the same time.  He must have looked longingly at those pins and his thoughts must have had a kind of depth to them like my young thoughts had to me.

Several years later when i was getting around by myself and with friends, I brought Bobby Palazini and Johnny Wyatt to the bowling alley and
proudly replayed the scene that I had witnessed some years earlier.  They were not impressed, by then the big ten pin alley’s were automated
and places to bring a date. No one was impressed by duck-pins anymore.
But I was telling you about the mill.  Back in the 1950’s the French Mills were quite the place for skilled textile workers.  Dad was proud of the Alsace.  He loved his job there.  I still have a picture of him receiving a Christmas present from the women who worked for him at the Alsace.  He is holding up a burgundy red lamp with victorian figures on the front and painted in gold were the designs that framed the picture on the front of the lamp.  It sat in the front window of the house that Dad finally was able to buy in 1950.  The lamp was perched on a lamp table and the center of the room contained a chrome and grey kitchen table covered in formica.  Dad use to crouch beneath the table and polish the chrome legs of the table with some kind of paste wax that came in a yellow and black can.  It too was stored in the closet off the kitchen and come to think of it may well have been the source of the weird smell that emitted from that closet.
Dad respected his bosses.  there was something about authority and how the French-Canadians treated them that made for a perfect fit.  The old Belgian families that brought the financing for the mills to Woonsocket were industrialist who had a kind of Catholic class to them.  The Lafayette, the French Worsted, & The Alsace were part of a huge red brick district that made up a section of Woonsocket.  Before the mills began to migrate south where the labor was cheaper, you could hear the loud and strange noise that these mills made.  When inside you could tell what one spinning frame was doing and what it sounded like, but from outside it was like a huge hive of industrial noise.  Buy the time I turned old enough to work in one of these industrial hives, I had had it with the idea of spending a life time in one of these oil covered mills.  I hated the sight and the smell of them.  But Dad was still working in them.  Doyle Carpet was the last mill that he worked for.  The old man who owned that place was a nasty cuss of a guy.  Old Man Doyle was skinny and was constantly moving.  Mom worked there for a while as well.  She was righteously incensed by by the old man and when he told her to keep her can of soda in the toilet tank to keep it cold–it must have been more than she could bare.

One by one they began to burn down.  These hive of spinning frames dripping with oil that lubricated every mechanical and moving part of these giant woolen mills began to catch fire, The Dunn, The Guerin, The Jenckes, The Falls Yarn, and the giant mills along Clinton and Social Streets, one at a time they would burn.  They were such large raging five alarm fires that for miles away you could see the sky ablaze in red and orange glow.  Listening to the radio, blow by blow you heard the walls comes crashing down and the suspicion each time that some millionaire was going to collect some huge insurance bonus.
Today, as I sit and contemplate my retirement and as I remember back to my Dad’s retirement I think back to the Mills of Woonsocket and how on the backs of so many immigrants these industrial giants ate up humanity and spit out remnants of textile fiber that must have covered the globe.  There was such a thing back then as mill-life.  There was a camaraderie.  One would talk about the advantage of one mill over another.  At the Bonin there was even a free week with pay around the 4th of July.  By the time I was old enough to know where Dad and that brown Vinyl bag was going each day, I became clearer and clearer that I had no interest in contributing my life to this industry.
But for dad, certainly when he was a young man, he had the personality and the perseverance to climb out of bed each day and to climb down three flights of stairs to his 1940 Cadillac and with pride make his way to the mill.  The end of the Alsace ended that for Dad.  Every other mill job was just another day of drudge.  He grew to dislike the old clanging mills as much as I grew to dislike them.
The closet door, next to the washing machine, near the kitchen, that held the Kirby Deluxe Vacuum and the bottles of soda and beer and his brown lunch bag and the can of paste wax are still there in my mind.  Mom is at the stove. Dad has a newspaper.  The plaques on the wall now hang in my sister’s house.  The memories are like still-life’s of a era come and gone.  No one is moving in these memories we are all stiff and
silent, as if a Brownie Kodak had snapped the photo.  The Gladiolas that Mom loved, the tomatoes that were only beat in size by Uncle Leo’s, the cabin that was called the Night Owl…they are memories that barely keep alive a period fading out of existence, being kept alive by nothing more
than a passing thought of a worn out, brown vinyl, lunch bag.